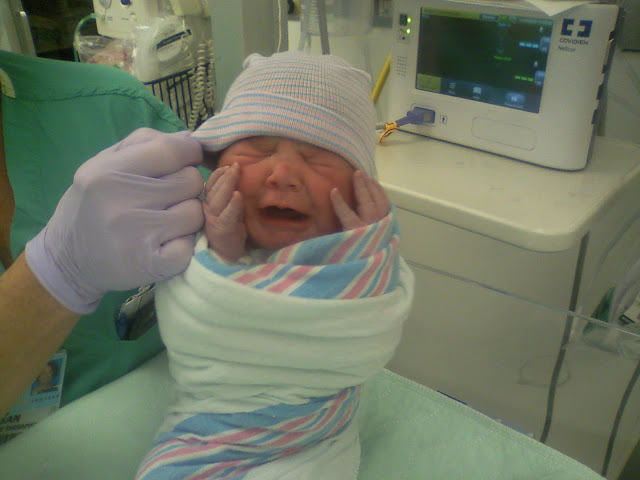 "Let everything that has breath praise the Lord."
Psalm 150:6

Sweet Guinevere Pearl has arrived safely.  Weighing in at 7 pounds, 8 ounces, she is simply precious, very sturdy, and quite the noisemaker throughout the night. But, she is here. Praise the Lord!

We sincerely thank you for your prayers during this challenging journey of bringing her to term.
As many of you know, Jude's delivery was extraordinarily difficult as circumstances quickly turned, leaving him in critical condition. I too struggled as my heart gave us quite a scare. The lengthy recovery was also somewhat taxing. We made the grim decision that Jude would be the Olson caboose.

But the Lord had a different plan...and for me, it can be challenging at times to surrender and trust Him fully.

The early news of my pregnancy left me speechless as we were struggling over the threshold to digest Jude's recent diagnosis. There was deep concern if I would be able to  carry her to term after being conceived so soon following Jude's birth. There were countless prayers anticipating her arrival.
Days before Gwenny's debut, she suddenly turned transverse. We were concerned because somewhere in that timeframe, Jude did the same.
The night prior to her arrival, I was unable to feel her move so we went in to have her monitored. She was still in a transverse position but the monitor thankfully showed movement.
Upon returning home and unable to sleep, I  spent the night making last minute preparations, writing notes to the kiddos, and praying, asking God to move this baby. He did. The following morning, just before surgery, her location was once again "head down."
The doctor  that we had asked to deliver her showed up five minutes before the scheduled surgery. We hadn't expected him because he rarely conducts C-sections. He is the chairman of the high risk maternal fetal medicine unit and travels quite a bit. We had learned the previous evening that he was in Chicago. As another doctor met us that morning to discuss the procedure, a nurse came in to inform us that our preferred doctor would be arriving minutes later. Smiles.
He has been referred to as a "genius" by the nurses who cared for me during my pregnancy. The measures he took to safely deliver Gwenny proved him so. His skill was remarkable and kept the other doctors and nurses occupied in awe as they attended me post surgery.
This time it was different. Though the surgery was extensive, the spinal went well and after the first 10 minutes or so, my heart rate returned to normal and I began to feel better during the procedure. Though I was prepped and ready, a blood transfusion proved unnecessary. Big praises.

Paul came in shortly before her arrival and this time, unlike before, we heard the sweet lullabies of our baby's first cries and just after her initial assessment, the nurse handed our swaddled little girl to him. She never left our side the entire hospital stay. 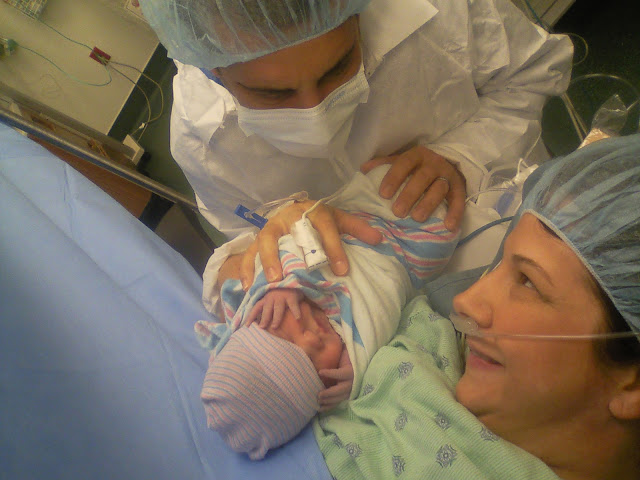 Our arrival home came much sooner than expected. The children had decorated the driveway and sidewalk in bright colors of chalk. A balloon adorned the front column as our seven other sweet blessings poured out the front door to greet their new baby sister.

Jude cackled as we introduced him, joyfully calling her "kitty." Our little guy has no idea how his life will be forever changed!
I feel good. Gwenny is nursing well. We are grateful beyond words.
We have much to be thankful for on this journey of learning to trust him.
Many blessings,
Jen 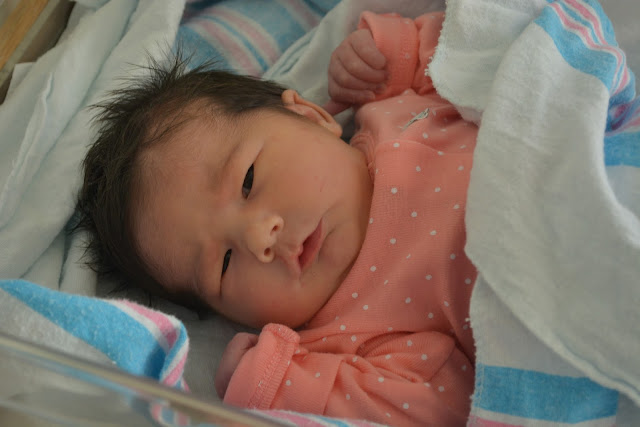