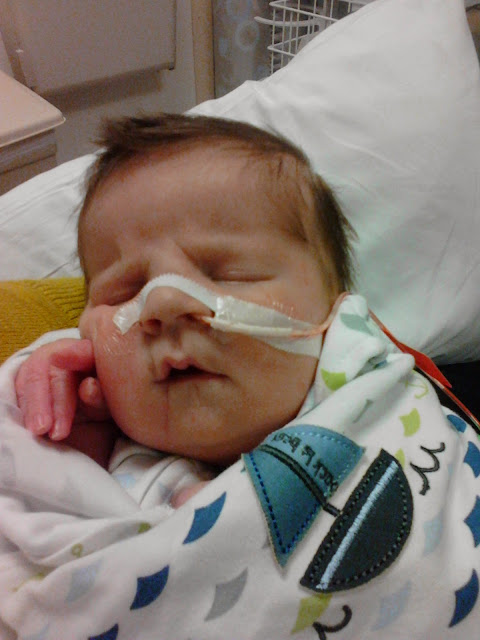 We're SLOWLY making progress. I've delayed to update due to the amount of time we're spending at the hospital. Our family life has become much more accelerated due to the consistent need Jude now has for us.
Jude has moved from critical care to intensive care! He even relocated to a new pod with built in cabinets! This is truly an upgrade to a born organizer mommy. He also graduated to his own crib that could fit eight Judes. When it arrived, it was like a dump truck moving through the NICU.

As of yesterday, Jude has completely weaned from all narcotics but entering the cranky, withdrawal stage. The weaning happened much quicker than expected. It has required our time at the hospital to be more intense however, due to the amount of time it takes consoling him. He is much more alert now and isn't as easily settled.
Since Jude is learning to eat, I'm thankful I researched other CDH blogs in advance. This stage is a bit discouraging. Paul didn't read the blogs and thinks a few feeding delays shouldn't retain us from coming home. After all, ten grand a day seems a tad steep to learn to eat! I think his overbearing attitude has some of the nurses a little nervous. I'm still carrying the mindset that any good mom can get her baby to eat efficiently with a little extra work. But we're both actually beginning to grasp what is really happening.
His feeds are being advanced 5ml every 9 hours. This is proving arduous for Jude. If the feed isn't completed, he's tube fed the rest. It's an uphill battle in every way. He is struggling to keep with the program by tiring quickly. CDH babies must work especially hard to simultaneously suck, breathe, and swallow. He has tachypnea which is a condition of rapid breathing due to the diaphragmatic hernia and only one cooperating lung. Vomiting three meals in the past 24 hours is contributing to some weight loss. He hasn't reached the goal of 75ml that would allow him to begin growing.

Since the NICU doesn't stock outfits to fit 9lb babies, Paul and I do frequent Target runs to purchase more snuggles for Jude. It requires real science to consider which items will fit him best considering exit routes for all of the wires connected to Jude. The zipper has to work from top to bottom etc. We have quite the variety of outfits at home but never anticipated needing them so soon. It's no picnic to spend $20 on one article of clothing when I've been spoiled by the 50 cent yard sale bargains!
Heaviness defines spending most of the day until the late night hours in a cold pod with your baby instead of enjoying him in the comfort of your own home. It's complex to manage seven tubes and wires hooked to your little guy as you move, feed, and coddle him. Though all of our nurses have been exceptional, it isn't rational to a mommy's nature to say goodbye every night. At the end of the day, we are left without much strength, in desperate need of rest and reviving.
Due to Paul's eagerness and overzealous ambitions, there is discussion of bringing Jude home with a feeding tube and continuous night time feed pump. Though discharge is still some time away, last night we had our first lesson on inserting the feeding tube. I tried my best to prove I was capable but the uncomfortable procedure nearly overpowered this postpartum mama. Zoning a couple of times, I attempted to keep my personal emotions at bay. I'm secretly hoping that Paul will master this without my help once we arrive home.
Despite the slow feeds, the mood is much lighter now and we can't express the gratefulness we feel that Jude is progressing so well. As we've come to know the doctors and charge nurses, we've become grimly aware of the sheer reality of what we've been spared from. Before Jude's birth, the NICU unit was intensely preparing for him. These babies are always very sick when they arrive. It is a stressful balancing act to keep them critically stable. Only one out of two survive the early weeks. The last CDH baby was discharged six weeks ago at the age of 8 months to live in a nursing home, never to know life apart from the ventilator. Out of all the CDH babies who survive, their morbidity is high. They have life-long problems if they survive infancy.
We are all beginning to feel anxious to get on with life outside the NICU. It is a doleful place and we've seen many a weeping parent. The suffering we're witnessing is establishing a new perspective for our family. It has influenced us all. I have even felt guilty at times to have such a "healthy" baby in comparison to so many others.
We don't feel like Jude is alive due solely to all the prayers of the saints, though we'd never refute the power of prayer. We don't agree that Jude is alive because the Lord has a special mission for him. Scripture states the Lord ordains the days of all of our lives, having purpose for each of us whether we live three days or eight decades. We certainly know better than to claim the Lord has favor on us, knowing we are the least deserving. So we won't waste a minute trying to figure out the mind of the Lord but we will give thanks to Him who is the creator of Jude's life and praise Him alone for His goodness whatever the outcome.  Forever  learning... ~ Jen